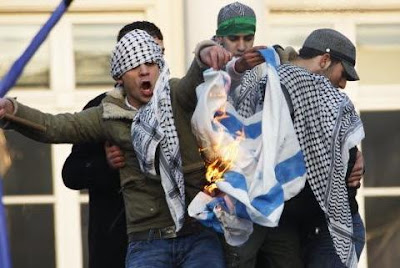 Protesters rioted in a Jewish neighborhood in Antwerp after a pro-Hamas rally in the city. (Reuters)
There was a considerable amount of damage done by the protesters.
De Telegraaf reported:

Jews in Antwerp afraid after riots by league (AEL]
Many Jews in Antwerp did not go on the street Wednesday after the demonstration from the AEL against the war violence got out of hand.

There was considerable damage done

Also in the Diamantbuurt where many Jews live and work said the chief editor of the weekly Joodse Actueel, Michael Freilich. The Jewish community fears according to him to become victims of vandalism and violence. An internal sms agency from the community warned people to avoid the Diamantbuurt.”

According to Freilach everyone is afraid that the situation could escalate.

Carl in Jerusalem has more on the rioting and video of the protest.

Gates of Vienna reported that the rioting was instigated by the AEL, the Arab European League, an Arab Nationalist immigrant movement which recently invited Hezbollah to the Belgian Parliament.