The protesters were shouting, “Peace, Peace, Palestine.”
…Later they looted the Starbucks. 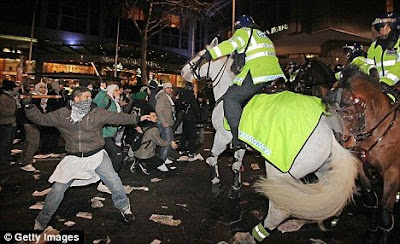 “Moderate” British Muslims warned that Gaza backlash was about to hit England.
They weren’t kidding:

The pro-Hamas supporters tore up the city and attacked police at the Israeli Embassy. 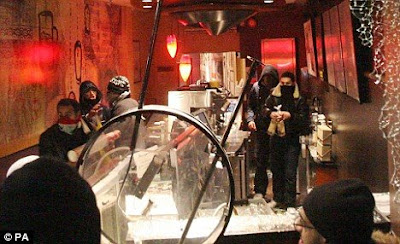 Demonstrators inside the Starbucks branch near the Israeli embassy in London. (Daily Mail)

Violent clashes occurred between police and around 20,000 protesters outside the Israeli Embassy in London – with an estimated 100,000 protesters airing their views around the city.

Windows were smashed and policemen were injured – with one officer knocked unconscious in the running battles and two requiring treatment for facial injuries.

There were reports that some protesters had tried to set fire to police vans.

The violence, which broke out in front of the Israeli Embassy, appeared to be led by a hard-core of masked and hooded youths.

A national demonstration against Israel’s attack marched from Speakers’ Corner at Hyde Park today to the Israeli embassy in High Street Kensington. 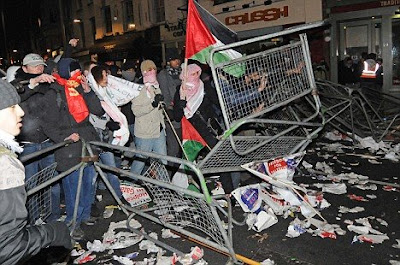 Barriers are broken down as the protest turns ugly, with at least one police officer hospitalised by the riots. (Daily Mail)

The situation is getting dangerous for Jews is Great Britain.
Earlier this week a Jewish man was attacked in North London and the door to a synagogue in North London was burned.

Harry’s Place has more photos from the London rally.