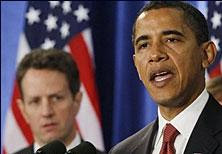 In a time of national financial crisis the president-elect has nominated a schmuck who didn’t pay taxes and took tax reimbursements for the taxes he didn’t pay.

Although it has been dismissed by some observers as a “hiccup” in an otherwise smooth confirmation process, treasury secretary-designate Timothy Geithner’s failure to pay self-employment taxes during the years he worked at the International Monetary Fund is causing some Republicans on Capitol Hill to ask serious questions about his actions. First among those questions is why he accepted payment from the IMF as restitution for taxes that he had not, in fact, paid.

Documents released by the Senate Finance Committee strongly suggest that Geithner knew, or should have known, what he was doing when he did not pay self-employment taxes in 2001, 2002, 2003, and 2004. After his failure to pay was discovered, first by the IRS and later during the vetting process, Geithner paid the federal government a total of $42,702 in taxes and interest.

The IMF did not withhold state and federal income taxes or self-employment taxes — Social Security and Medicare — from its employees’ paychecks. But the IMF took great care to explain to those employees, in detail and frequently, what their tax responsibilities were. First, each employee was given the IMF Employee Tax Manual. Then, employees were given quarterly wage statements for the specific purpose of calculating taxes. Then, they were given year-end wage statements. And then, each IMF employee was required to file what was known as an Annual Tax Allowance Request. Geithner received all those documents.

The tax allowance has turned out to be a key part of the Geithner situation. This is how it worked. IMF employees were expected to pay their taxes out of their own money. But the IMF then gave them an extra allowance, known as a “gross-up,” to cover those tax payments. This was done in the Annual Tax Allowance Request, in which the employee filled out some basic information — marital status, dependent children, etc. — and the IMF then estimated the amount of taxes the employee would owe and gave the employee a corresponding allowance.

At the end of the tax allowance form were the words, “I hereby certify that all the information contained herein is true to the best of my knowledge and belief and that I will pay the taxes for which I have received tax allowance payments from the Fund.” Geithner signed the form. He accepted the allowance payment. He didn’t pay the tax. For several years in a row.

According to an analysis released by the Senate Finance Committee, Geithner “wrote contemporaneous checks to the IRS and the State of Maryland for estimated [income] tax payments” that jibed exactly with his IMF statements. But he didn’t write checks for the self-employment tax allowance. Then, according to the committee analysis, “he filled out, signed and submitted an annual tax allowance request worksheet with the IMF that states, ‘I wish to apply for tax allowance of U.S. Federal and State income taxes and the difference between the “self-employed” and “employed” obligation of the U.S. Social Security tax which I will pay on my Fund income.”

In a conversation today with sources on Capitol Hill who are familiar with the situation, I asked, “Was Geithner made whole for tax payments that he didn’t make?”

“Yes,” one source answered. “He was getting the money. He was being paid a tax allowance to pay him for tax payments that he should have made but had not.”

Michelle Malkin has more on the latest Obama administration scandal.
(And, he’s not even in office yet!)

UPDATE: Given that Obama Supports “Tax Cuts” for Those Who Don’t Pay Taxes… it makes sense he’d pick a man to serve as Treasury Secretary who took tax reimbursements for taxes he didn’t pay.