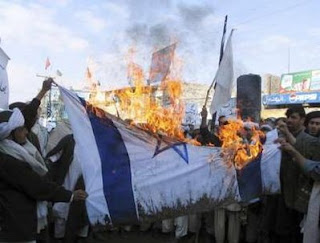 Pakistani tribesmen and supporters of the Pakistani Islamist party Jammet-e-Ulema-e-Islam (JUI) burn a mock Israeli flag in protest against the Israeli air strikes on Gaza during a rally in the Pakistan-Afghan border town of Chaman, January 9, 2009. (REUTERS/Saeed Ali Achakzai)

Thousands of Pakistanis cheered for Bin Laden at an anti-Israel protest in Chaman today.
Religion of Peace and Easy Bourse reported:

The rally in the town of Chaman was organized by the Jamiat Ulema-e-Islam political party and was the biggest yet in Pakistan against the Israeli campaign in Gaza, which has killed hundreds of Palestinians.

“Our estimate is that there were more than 3,000 people at the rally,” local police station chief Abul Latif said.

“Long Live Osama bin Laden,” protesters chanted as they marched through town carrying placards that read “Jihad is the only treatment for Israel,” “Stop killing innocent people in Palestine” and “Stop atrocities against Muslims”.

They also chanted “Death to Israel, death to America and death to Britain”.