This was disgusting even for the UN–
At the UN last Thursday the General Assembly President alleged the Jews were like Nazis. 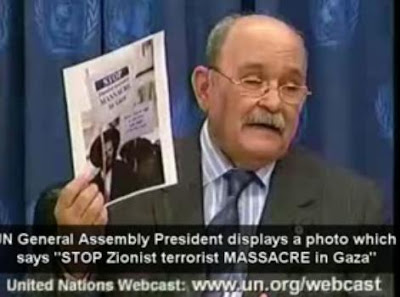 January 8, 2009: News briefing “on the situation in Gaza” by the General Assembly President Miguel d’Escoto Brockmann . The GA President displays a photo which says “STOP Zionist terrorist MASSACRE in Gaza”.

EYE on the UN posted video of the latest anti-Semitic display on the assembly floor:

Israel Matzav has more thoughts on the future of this corrupt organization under the Obama Administration.