He’s baaack….
Osama Bin Laden released another audiotape today. In this latest release he wonders if the US has any fight left in it after Bush. 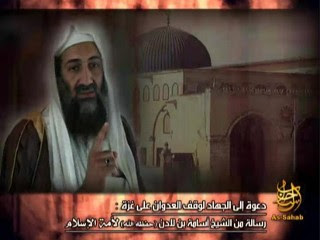 Al Qaeda leader Osama bin Laden releases a new audio message in which he asks if America is still capable of fighting after the Bush administration. He also calls for jihad against Israel and concludes with a challenge to the incoming Obama administration.
(ABC)

In a direct challenge to President-elect Barack Obama, Osama bin Laden questions whether America “is capable to keep fighting us for more years” in a new audio message attributed to him Wednesday morning on an internet website.

“Now America is begging the world for money,” bin Laden says, “and the USA will not be as powerful as it used to be.”

“This rapid failing for America was one of the reasons that the Israelis started their attacks against Gaza and just to make use of what’s left of the Bush term,” he says.

Bin Laden makes reference to Vice-President elect Joseph Biden, quoting him as saying “the financial crisis is bigger than we expected” and the al Qaeda leader counsels patience in continuing to fight the U.S.

“The majority of the U.S. people are happy to get rid of Bush, Bush left for his successor a heavy heritage, the hardest part of heritage is guerilla wars,” bin Laden says.

Osama obviously knows he won when Republicans lost.
The AP has more:

Al-Qaida chief Osama bin Laden urged Muslims to launch a jihad against Israel and condemned Arab governments as allies of the Jewish state in a new message aimed at harnessing anger in the Mideast over the Gaza offensive.

Bin Laden spoke in an audiotape posted Wednesday on Islamic militant Web sites where al-Qaida usually issues its messages. It was his first tape since May and came nearly three weeks after Israel started its campaign against Gaza’s militant Hamas rulers.

“There is only one strong way to bring the return of Al-Aqsa and Palestine, and that is jihad in the path of God,” bin Laden said in the 22-minute audiotape, referring to the revered Al-Aqsa Mosque in Jerusalem. “The duty is to urge people to jihad and to enlist the youth into jihad brigades.”

“Muslim nation, you are capable of defeating the Zionist entity with your popular capabilities and your great hidden strength — without the support of (Arab) leaders and despite the fact that most of (the leaders) stand in the barracks of the Crusader-Zionist alliance,” bin Laden said.

The authenticity of the tape could not be independently confirmed, but the voice resembled that of bin Laden in previous messages.

The tape, entitled “Call for jihad to stop the aggression on Gaza,” was played over a still picture of bin Laden and the Al-Aqsa Mosque in Jerusalem’s Old City, one of Islam’s holiest sites. But there were no English subtitles and flashy production effects that usually accompany such messages.

The Jawa Report says- “Told you so.”