Benjamin Netanyahu, has been on the forefront of delivering the truth about Hamas, Iran, and the West’s stake in the outcome of this conflict.

Mr. Netanyahu has been criss-crossing the State of Israel reassuring its citizens that Israel’s Defense Forces are committed to eradicating the threat from Hamas.

As head of the Likud Party, he has suspended his party’s election campaign during this time of national emergency.

In August 2007 I traveled with a small group of US bloggers and was honored to meet with Former Israeli Prime Minister Benjamin Netanyahu. 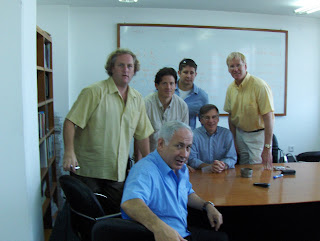 Today Former Prime Minister Netanyahu set aside time from his busy schedule to participate in this briefing. He took questions from several bloggers during the call.

Allen Roth President of One Jerusalem introduced Benjamin Netanyahu.
Allen asked PM Netanyahu if this battle has international consequences.
PM Netanyahu described the current battle as the front line on the war on terror. It is one of those instances where this is a “just” war in that it has legitimate goals and consequences. Hamas is using the tactics of “double war crimes.” It is shooting missiles at innocent civilians while hiding behind innocent civilians. The forces of darkness are running Hamas. This is a classic example of a just war.

In the long run the goal is to remove the threat by stopping the firing and preventing the resupply of new rockets. Mr. Netanyahu said that objectives are to re-establish Israel’s security and to end the supply of armaments for Hamas.

Time and again, Mr. Netanyahu reminded the audience that Hamas is a proxy for Iran and that a Defeat of Hamas is a defeat for Iran.

As blogger, both Jews and non-Jews can tell the truth. We can get the facts straight. Hamas took over Gaza. You have to ask– why are they firing these rockets for 8 years?

Those who deliberately target civilians and hide behind civilians are the war criminals.

The greatest danger we face in this century would be if radical Islam getting their hands on nuclear weapons. This is the biggest challenge facing the world, the president-elect, the international community and Israel need to prevent Iran from obtaining nuclear weapons.

John Hawkins has more from the question and answer period.

An audiotape of the conversation is posted at One Jerusalem.

UPDATE: Tom W. added this further analysis in the comments:

In this morally topsy-turvey world a nation as humane, enlightened, generous, and constructive as Israel is vilified, while genuine time-traveling savages from the Bronze Age–who openly and mercilessly butcher, rape, steal, destroy, and who announce their plans to convert or kill you–are the heroes we’re supposed to support.

UPDATE 2: As another example of the Islamist’s “double war crimes” the IDF posted video of Hamas launching rockets from a school yard during the ceasefire with Israel: