It is likely Barack Obama would not qualify for a national security clearance if he were not elected president due to his anti-American and extremist associates.

Now we know that Barack Obama’s nominee for Treasury Secretary, Timothy Geithner, would not qualify for a position at the IRS due to his failure to pay taxes.

He would not pass the 10 Deadly Sins of the IRS test: 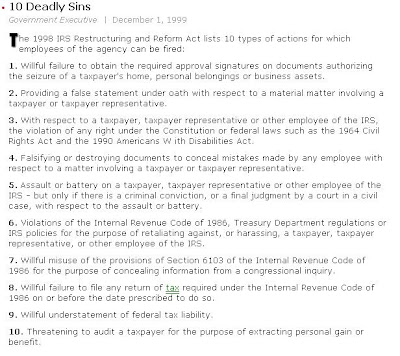 But, it looks like Geithner will lead the organization anyway.
Maybe that’s what “hope and change” is all about.

Of course, The New York Times says Geithner’s error is a common mistake. National Review discovered that the IRS admitted that there was just one similar case in 2007.