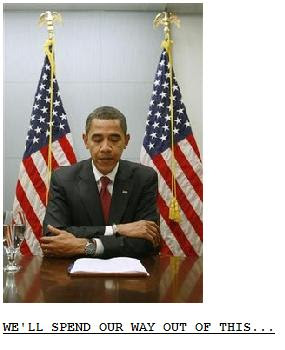 If it works it will be the first time in history that an economy was able to spend its way out of a meltdown.

Leftist Loven reported the news for the AP yesterday:

President-elect Barack Obama warned of dire and long-lasting consequences if Congress doesn’t pump unprecedented dollars into the national economy, making an urgent pitch Thursday for his mammoth spending proposal in his first speech since the election.

Since his November election, Obama has deferred to President George W. Bush on foreign policy matters such as the Middle East. But, with the worsening of the economic situation, Obama has waded deeply into domestic issues as he works to generate support for his plan to create jobs and jolt the economy into recovery.

In related economic news… The unemployment rate reached a level not seen since the Clinton years in December.
The horror.

Victor Davis Hanson has a more honest take on the latest “stimulus” package.

UPDATE: Nancy Pelosi is already proposing tax hikes on “rich” Americans to go with Obama’s handouts to those who pay none:

House Speaker Nancy Pelosi (D-Calif.) is urging the incoming Obama administration to stick to its campaign pledge and immediately increase taxes on the wealthiest Americans, a position that President-elect Barack Obama has wavered on since winning election.

Pelosi told reporters today that she “couldn’t be more clear” in opposing some Obama advisers’ wish to wait for the tax cuts on the highest income earners to expire in two years, as they are set to do under current law. “Put me down as clearly as you possibly can as one who wants to have those tax cuts for the wealthiest in America repealed,” she said.

Pelosi said the income tax cuts to the highest earning Americans — which were decreased from 39.6 to 35 percent as part of the 2001 Bush tax plan — have been “the biggest contributor to the budget deficit,” which now stands at $1.2 trillion for fiscal year 2009. That deficit figure does not include the impact of the pending stimulus measure, which will cost around $800 billion, nor does it include estimates for supplemental spending bills that will come later this year to finance the wars in Iraq and Afghanistan.

Hmm. That’s interesting…
And, here we thought the biggest contributor to the budget deficit was the government’s outlandish spending and waste?
Thanks for clearing that up, Nancy.