It’s official. Regime leaders and dictatorships take note:
There will be no freedom movement on Barack Obama’s watch. 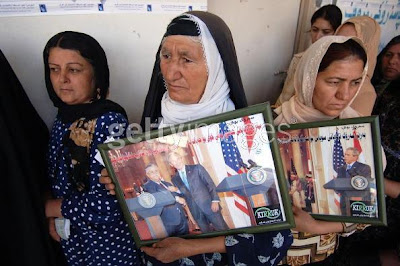 Iraqi women carrying pictures of President George W. Bush show up to vote in Iraq’s national referendum on a draft constitution October 15, 2005, at a polling station in central Iraq. (Via Free Thoughts)

Brutal tyrants sleep well.
The Bush freedom movement has been called off.

“To the Muslim world, we seek a new way forward, based on mutual interest and mutual respect,” President Barack Obama said in his inaugural. But in truth, the new way forward is a return to realpolitik and business as usual in America’s encounter with that Greater Middle East. As the president told Al-Arabiya television Monday, he wants a return to “the same respect and partnership that America had with the Muslim world as recently as 20 or 30 years ago.”

Say what you will about the style — and practice — of the Bush years, the autocracies were on notice for the first five or six years of George. W. Bush’s presidency. America had toppled Taliban rule and the tyranny of Saddam Hussein; it had frightened the Libyan ruler that a similar fate lay in store for him. It was not sweet persuasion that drove Syria out of Lebanon in 2005. That dominion of plunder and terror was given up under duress.

True, Mr. Bush’s diplomacy of freedom fizzled out in the last two years of his presidency, and the autocracies in the Greater Middle East came to a conviction that the storm had passed them by and that they had been spared. But we are still too close to this history to see how the demonstration effect works its way through Arab political culture.

The argument that liberty springs from within and can’t be given to distant peoples is more flawed than meets the eye. In the sweep of modern history, the fortunes of liberty have been dependent on the will of the dominant power — or powers — in the order of states. The late Samuel P. Huntington made this point with telling detail. In 15 of the 29 democratic countries in 1970, democratic regimes were midwifed by foreign rule or had come into being right after independence from foreign occupation.

In the ebb and flow of liberty, power always mattered, and liberty needed the protection of great powers. The appeal of the pamphlets of Mill and Locke and Paine relied on the guns of Pax Britannica, and on the might of America when British power gave way. In this vein, the assertive diplomacy of George W. Bush had given heart to Muslims long in the grip of tyrannies. 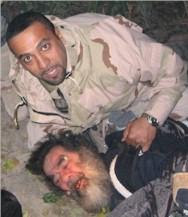 Iraqi interrogator “Samir” had the historic privilege of talking Saddam out of his spider-hole and slapping his face.
But, there will be no tyrant slapping during Obama’s watch.

Take that image of Saddam Hussein, flushed out of his spider hole some five years ago: Americans may have edited it out of their memory, but it shall endure for a long time in Arab consciousness. Rulers can be toppled and brought to account. No wonder the neighboring dictatorships bristled at the sight of that capture, and at his execution three years later.

The irony now is obvious: George W. Bush as a force for emancipation in Muslim lands, and Barack Hussein Obama as a messenger of the old, settled ways. Thus the “parochial” man takes abroad a message that Muslims and Arabs did not have tyranny in their DNA, and the man with Muslim and Kenyan and Indonesian fragments in his very life and identity is signaling an acceptance of the established order. Mr. Obama could still acknowledge the revolutionary impact of his predecessor’s diplomacy, but so far he has chosen not to do so.

What a depressing development.
George W. Bush liberated 50,000,000 from the world’s most brutal regimes. He forced Syria out of Lebanon and Russia out of Ukraine and Georgia.
But, it looks like those days are over.

Already, Barack Obama has bowed down to Russia and appeased the regime in Iran.
It is sad to think what is ahead for those suffering under the fist of tyranny today with Barack Obama in charge.
We will see.

Related… Iraqis will vote this week in historic provincial elections- the first elections since 2005.
UPDATE: Aitch748 chimes in:

Liberals talk a good game about being compassionate and about comforting the afflicted, but their hearts are stone. And they actually seem to believe that oppressed people around the world either prefer oppression to freedom or naturally gravitate to oppression.