(Updated with photos)
The Neo-Nazis and Islamists marched together against Israel in Calgary this past weekend. 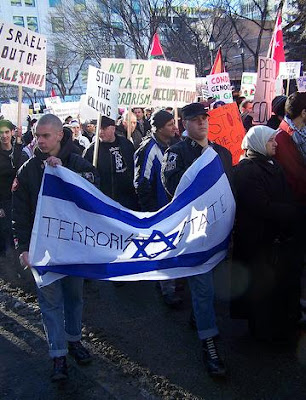 The neo-Nazi Aryan Guard are the people holding the defaced Israeli flag. Apparently, their hatred of Israel and Jews seemed to temporarily supersede their hatred of other groups, who they marched with in Calgary this past weekend. (Flickr via Kate)

The Aryan Guard joined Islamists and Communists at the anti-Israel rally in Calgary this weekend.
The National Post reported:

Critics of Israel are often quick to insist that they’re not anti-Semitic—just anti-Zionist, anti-“occupation,” or something along those lines. But not these guys: at a protest against Israel in downtown Calgary on the weekend, the Nazi group, the Aryan Guard, showed up to march alongside the Muslims. Of course, the Aryan Guard is honest enough to admit they just plain hate Jews, not bothering to strain themselves with arguments of nuance. They fit right in on Saturday with their posters of Israeli flags defaced with the accusation “Terror State.” As Darcey at Dust My Broom notes, the 150 “anti-racists” who came out in force to protest an Aryan Guard march in downtown Calgary last year didn’t complain this time. In fact, they marched right along with the Aryans, united under the swastika: the Arabs and Communists labeling the Jewish State a “Nazi” regime; the skinheads hoping to resurrect the Real McCoy.

Event organizer Shadi Abuid—who last made news a few years back as a university student when he brought to Calgary Norman Finkelstein, the popular anti-Israel author of “The Holocaust Industry”—told Canwest Global he was impressed with the “various groups uniting under one voice.” 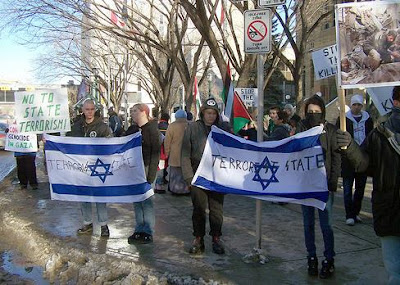 The neo-Nazi Aryan Guard are the people holding the two defaced Israeli flags. Apparently, their hatred of Israel and Jews seemed to temporarily supersede their hatred of other groups, who they marched with in Calgary. (Flickr via Kate) 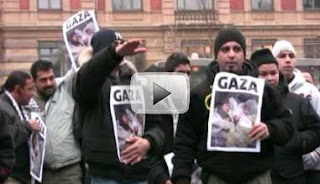 In Copenhagen this weekend the Islamists were giving the Nazi salute and and chanting, “We Want to Kill All the Jews.”