The Mumbai terrorists leaders cheered and praised Allah as the infidel hostages at the Taj Hotel were lined up and shot dead.
Faces of Evil: 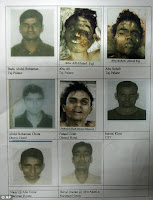 The 10 men who carried out the assault in Mumbai in November were among a group of 30 who volunteered to put their lives on the line, according to Mumbai Police Deputy Commissioner Deven Bharti. Another 20 were reportedly ready to die. (Daily Mail)

The terrorists cheered their killing.
Bill Roggio reported at The Long War Journal:

The Pakistan-based handlers of the Mumbai terrorists ordered the murders of civilians over the phone and cheered after hearing the gunfire, according to the dossier of evidence India provided to the Pakistani government.

The documents, obtained by the Indian newspaper The Hindu, provides a cold, calculating, and chilling look at the masterminds behind the late November military-style assault on the Indian financial capital of Mumbai.

The exchange between Mumbai terrorists Fahadullah and Abdul Rehman operating at the Trident Hotel and their Pakistani handlers provides a terrifying look at the minds of the masterminds behind the attack. The exchange shows they planned and executed the attack for maximum media coverage, ordered the murder of hostages, and cheered after the murders were carried out.

“Brother Abdul. The media is comparing your action to 9/11,” one unidentified handler said. “One senior police official has been killed,” referring to the chief of the Anti-Terrorism Squad killed in an earlier gunfight.

“We are on the10th/11th floor,” Abdul Rehman responded. “We have five hostages.”

“Everything is being recorded by the media,” the handler identified as Kafa told Rehman. “Inflict the maximum damage. Keep fighting. Don’t be taken alive.”

“Kill all hostages, except the two Muslims,” the other handler told Rehman and Fahadullah. “Keep your phone switched on so that we can hear the gunfire.”

“We have three foreigners, including women,” Fahadullah said. “From Singapore and China.”

“Kill them,” the handler said.

According to the dossier, Abdul Rehman and Fahadullah are recorded ordering all of the hostages except for two Muslims to stand in line. The terrorists then shot and killed the hostages.

The handlers are heard cheering in the background.