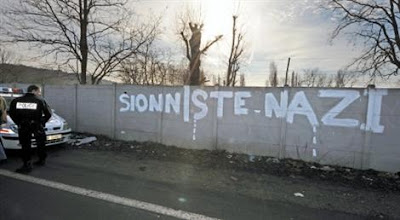 A policeman stands on Friday in front of an inscription reading “sionist – nazi”, painted overnight on a wall in Toulouse, southern France. France has been hit by around 60 anti-Semitic attacks since the start of the Israeli military operation in Gaza. (EJP)

A man was repeatedly stabbed for wearing a Jewish symbol in France.
IHT reported, via ROP:

France’s interior ministry says masked thieves who attacked a young man east of Paris to steal his car repeatedly stabbed him after noticing he was wearing a Jewish symbol.

Interior Minister Michele Alliot-Marie has condemned the “revolting attack” in the suburban town of Fontenay-sous-Bois and says authorities are working to find the perpetrators.

The ministry said in a statement Friday that the attackers shouted anti-Semitic threats at the man as they stabbed him four times with a knife in the Thursday evening attack.

The European Jewish Press has more on the anti-Semitic attack:

The 24-year-old man was beaten up late Thursday by two robbers who wanted to steal his car and, after they discovered he was Jewish, pulled out a knife and stabbed him, in the latest in a spate of such attacks.

“After noticing he was wearing a Jewish religious symbol, the aggressors made anti-Semitic threats and stabbed him four times with a knife,” Interior Minister Michele Alliot-Marie said in a statement.

The man suffered minor wounds from the attack in Fontenay-sous-Bois, southwest of Paris, according to police sources.

There have been 60 anti-Semitic attacks in France since the start of the Gaza War on December 27th.

Related… Zomblog- The Intifada Is Globalized.