Gaza militants said they have 15,000 rockets that await Israeli troops.
Russia Today has a good video of the developments in the north and south:

Israel has returned fire on border areas in Lebanon after missiles fired from there hit the town of Nahariya in northern Israel. There are reports that five people were injured in the attacks on the Israeli town. 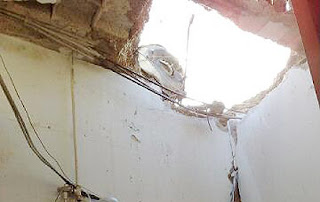 So far no group has taken responsibility.
The AP reported:

Lebanese militants fired at least three rockets into Israel early Thursday, threatening to open a new front for the Jewish state as it pushed forward with a bloody offensive in the Gaza Strip that has killed nearly 700 people.

Two people were lightly injured, and the rockets that exploded in Israel’s north raised the specter of renewed hostilities with Hezbollah, just 2 1/2 years after Israel battled the guerrilla group to a 34-day stalemate. Hezbollah started the 2006 war as Israel was battling Palestinian militants in Gaza.

Here’s another photo of the damage to the nursing home: 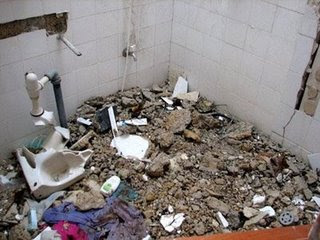 More photos from the attack at The Muqata.

Israellycool and The Muqata have the latest developments from Israel.

Israpundit has analysis on Gaza operations.

Lebanon’s Naharnet News reported that at least 3 rockets were fired into northern Israel– “The rockets fell a day after Hizbullah leader Sayyed Hassan Nasrallah warned that ‘all possibilities’ were open against Israel amid its deadly offensive in Gaza.”