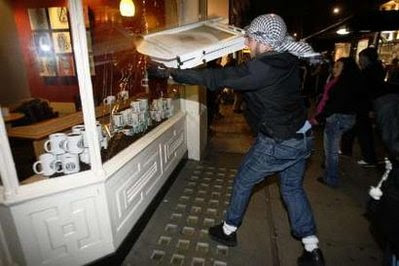 A pro-Palestinian protester throws a sign board into the window of a Starbucks cafe in Piccadilly, central London after a demonstration against the Israeli offensive in Gaza, in Trafalgar square, January 17, 2009. (REUTERS/Luke MacGregor)

A demonstration against Israeli attacks on Gaza ended in violence after protesters looted and damaged shops, police said.

Scotland Yard is investigating the damage in central London, which was thought to be targeted at coffee shop chain Starbucks for the second week running.

A Metropolitan Police spokesman said: “(It) is believed to be two branches of Starbucks, one in Shaftesbury Avenue, junction with Rupert Street and one in Piccadilly. Windows have been smashed and shops looted.”

The spokesman, who stressed the trouble was caused by a small minority, said officers contained a group of up to 200 people in Piccadilly which they believed was making its way to the Israeli Embassy in Kensington High Street.

And about 40 people were contained in Hyde Park to prevent a further breach of the peace, he added.

Commander Bob Broadhurst, in charge of public order policing for the Met, said: “Once again what we have witnessed in London is a group of thugs, who are not interested in lawful protest, run through the streets smashing shops without care for the alarm they caused the public.

“Thousands of people expressed their views in an earlier, lawful, rally in Trafalgar Square…What followed was totally unacceptable criminal behaviour by a small minority who do not appear to care about any cause. Their behaviour was inexcusable as they took part in wanton criminality.”

The violence followed demonstrations by thousands of protesters, who waved banners demanding an end to the attacks on Gaza and chanted “Free. Free Palestine”. 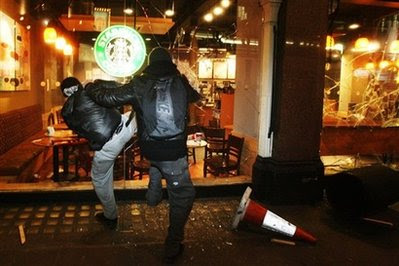