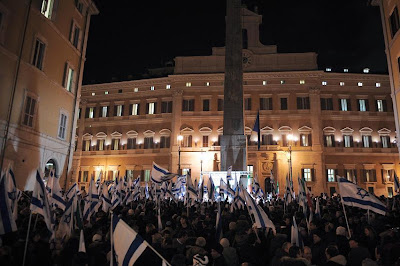 Around 100 Italian Parliament members rallied in Rome at the Piazza Montecitorio for Israel.

A friend passed this on–
Fiamma Nirenstein, a journalist and some-time resident of Jerusalem, is a new Member
of the Italian Parliament who is outspoken on Israel’s behalf. She writes below that there is increasing understanding of what Israel is facing in its current war.

We didn’t expect what you see now in the picture. This is the square of the Italian Parliament in Rome, Piazza Montecitorio: you can see the Palace on top of the square, and in front a lot of Israeli flags. That was yesterday night from 6,30 to 9,30 pm. What you cannot see here, is the extraordinary number and variety of members of the Parliament, about 100 from all political sides, that took the stage during our marathon: for about three hours we have been speaking about the role of Israel, its right to self defense, its moral height, its fight in name of all of us, of our civilization and values, against the wild hate of the Islamic jihad represented by hamas. It seems to me that for the first time in the too long history of the arab Israeli conflict, apart from a minority of crazy leftists and fascists that took the street on anti-Semitic slogans, we have obtained a huge consensus about one critical point: this is not an episode of a local conflict, there is nothing in it that reminds the land for peace theme that has characterized the Palestinian issue. This is an episode of the attack agains the western world, and Iran has a lot to do with it.
The change of attitude is great: the dictatorial religious nature of Hamas and the democratic, civilized nature of Israel are seen face to face for what they are at least by the European elite at large, dead and wounded notwithstanding, and there rises an identification with Israel against a regime that uses human shields and promises slaughters of Jews in its charter.

What happens today, at least in Italy, is the defeat and fall of the leftist ideologies: ideology has been the fig leaf that has allowed to justify all the most violent crimes and most disgusting verbal attacks. If Arafat launched the terrorist Intifada, if he promoted the martyrdom of children in public speeches, the ideologists were ready to justify him with the issues of occupation, the Palestinian misery and loss of any hope. Not the same with Hamas. History, in Italy, has brought to a profound crisis the ideology of revolution and the justification of any cruel attack against a pretended unjust imperialist order. That time is in good part over, nobody will see Hamas as the resolution of the problem and not as the problem itself. I also think that the word “peace” has lost that healing meaning that it had until yesterday. The new non-ideological point of view sees that there is no peace when one of the contenders doesn’t want it, and that even if the world in the short run asks for a truce, in the long run requests a defeat of Hamas.

Well, yesterday night many people, Ministers and Members of Parliament, composed a very new, interesting puzzle of opinions. I think that when you are not overwhelmed by exotic thirdworldism, the images of children educated as hate machines, the speeches of jihad leaders, from Ahmadinejad to Nasrallah, to Hanje, that deny the holocaust and promise death to Jewish and Christians too, have on us a result of great disgust. Westerners, thanks God, can still be disgusted by an uncivilized level of political speech.