The last mission by the activists didn’t fare so well either: 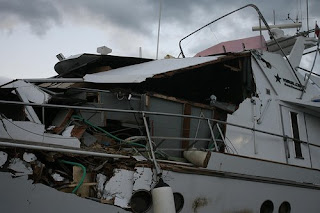 The last boat of pro-Hamas activists sailing to Gaza was rammed by an Israeli ship after they refused to turn around.

TEHRAN (FNA)- The Israeli regime refused entry to a Greek-flagged vessel carrying peace activists to the Gaza Strip, on the 20th day of attacks on the costal sliver.

Israeli warships threatened to open fire at the Arion on Thursday, after they intercepted the boat in the international waters.

The boat which was carrying peace activists from the US “Free Gaza” group, doctors, aid workers, European parliamentarians and medical aid for casualties of Gaza carnage was then forced to return to Cyprus.

“The boat has turned around and is coming back — it has been underway for several hours,” said Karin Pally, a coordinator for the US-based Free Gaza Movement.

“Apparently the gunboats threatened to shoot at them or stop them by any means, so a decision was taken to return to Larnaca,” press tv quoted him as saying.

An earlier attempt by the Free Gaza Movement to break Israel’s blockade on Gaza ended on December 30, when an Israeli navy vessel collided with the vessel. Passengers said it was a deliberate ramming.

Carl in Jerusalem has more on the latest voyage of the moonbats.