Who said life was fair?
For years now Madonna has been mocking the Catholic Church… not Islam. 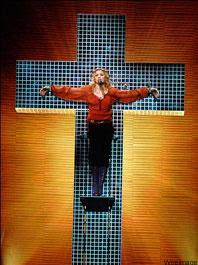 But, the Islamists don’t care.
They want the pop star beheaded because of the war in Gaza.
The People and ROP reported:

By Daniel Jones [email protected]
Madonna has urgently beefed up her family’s security after being targeted by Muslim fanatics seeking revenge for Israel’s attacks on Gaza.

One Palestinian terrorist chief has threatened to BEHEAD the superstar who is a dedicated member of the Jewish Kabbalah sect.

Madonna is also desperately worried for the safety of her children Lourdes, 12, Rocco, eight, and adopted David Banda, three.