On Tuesday Gaza terrorists shot several rockets 40 kilometers into Israel for the first time.
Israel’s largest southern city Beersheba with a population of 186,000 came under attack. 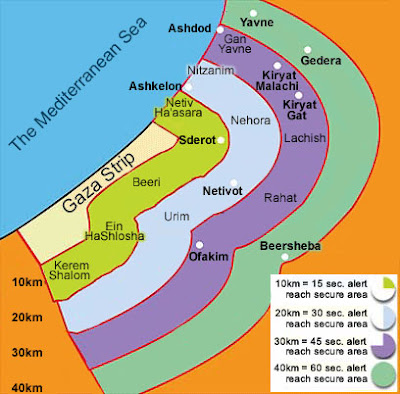 Beersheba, a city of 186,000, is 40 kilometers from the Gaza Strip and was thought to be out of reach from rocket fire!
This was a frightening development in the Islamist war against Israel.
What this means is that the Islamic radicals have the ability to reach Beersheba and potentially the town of Dimona and the Israeli nuclear facilities.
The Times Online reported, via Drudge:

There were growing fears in Israel last night that Hamas missiles could threaten its top-secret nuclear facility at Dimona.

Rocket attacks from Gaza have forced Israelis to flee in ever greater numbers and military chiefs have been shaken by the size and sophistication of the militant group’s arsenal.

In Beersheba, until a few days ago a sleepy desert town in southern Israel, there is little sign of the 186,000 inhabitants. Schools are closed and the streets of shuttered shops echo with the howl of sirens warning of incoming rockets.

Israeli planes, meanwhile, began a new stage yesterday in their offensive on Gaza, killing Nizar Rayyan, a senior Hamas official. The one-tonne bomb in Jabaliya is also understood to have killed two of his four wives and four of his twelve children. More than 400 Palestinians have been killed in the six days of Israeli attacks.

…Israeli officials say that Hamas has also acquired dozens of Iranian-made Fajr-3 missiles with an even longer range. Many fear that as the group acquires ever more sophisticated weaponry it is only a matter of time before the nuclear installation at Dimona, 20 miles east of Beersheba, falls within its sights. Dimona houses Israel’s only nuclear reactor and is believed to be where it stores warheads for its nuclear missiles.

Israel’s worst nightmare is that soon all its cities will be within range either of the Hezbollah Katyushas arrayed on the Lebanese border to the north or the increasingly sophisticated missiles stockpiled by Hamas to the south. Both groups have links to Israel’s archenemy Iran.

Israel has said that its aim is to smash Hamas’s rocket-firing capability but also to topple the hardline Islamist regime that seized power in the Gaza Strip last year after bloody street battles with its secular rivals Fatah. Until that goal is achieved, many in Beersheba are packing their bags and heading for Tel Aviv or Eilat.

Previously, the Gaza terrorists did not have the capability to reach Beersheba.
In the past the Islamists were only able to shoot rockets 11-12 kilometers: 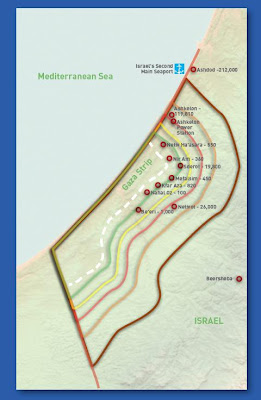 Meanwhile… Israellycool has a roundup of the latest action in Gaza.