The Iraqi government told Obama today– Not so fast on that cut-& running…
Legally Obama cannot withdraw US troops for one year after notification and only after Iraqi officials agree to the withdrawal.
Aswat al-Iraq reported:

BAGHDAD / Aswat al-Iraq: Legal expert Tareq Harb on Wednesday said that new U.S. President Barack Obama can not withdraw his troops from Iraq before one year from notifying the Iraqi side, noting that he can withdraw the forces only if the Iraqi government agrees.

Commenting on Obama’s speech upon taking office, Harb said “the president vowed to withdraw troops from Iraq but he did not mention the articles of the agreement in this respect.”

In a speech upon taking office, Obama echoed key promises from his historic election campaign by saying: “we will begin to responsibly leave Iraq to its people.”

Obama opposed the successful Bush surge that saved Iraq. He previously said that genocide was not even a good enough reason to keep US troops in the country.

And, for the record- The Obama White House website brags that Obama, as an Illinois state senator, supported keeping the Butcher of Baghdad in control of Iraq: 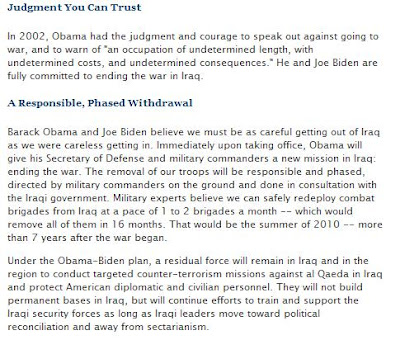 He calls that “judgement you can trust.”
(Sort of like his 20 years with G-D Wright)