UPDATE: Shabnameh.org has this message for Team Obama:

What Obama will, eventually, learn about his foreign policy!… Sooner = better for the world! Mr. Obama and Mrs. Clinton, please, take side with the “People” of Iran, not with a fascist and brutal regime that Iranians despise! 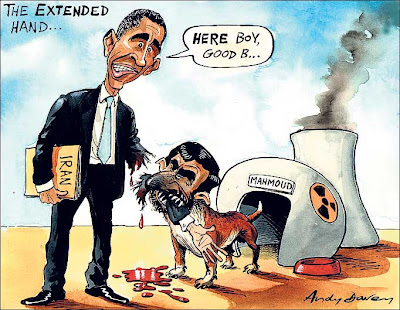 Hat Tip Banafsheh Zand Bonazzi
Yep. That cartoon about says it.
The regime has already stung Obama.
Will he learn? 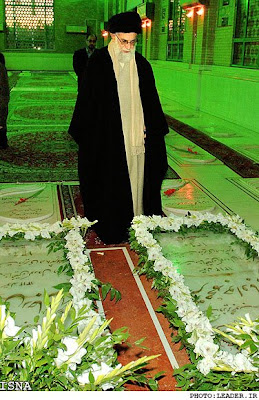 What a shock. The Iranians say Obama’s offer to sit and talk without preconditions shows American weakness and failure.
Breitbart reported:

US President Barack Obama’s offer to talk to Iran shows that America’s policy of “domination” has failed, the government spokesman said on Saturday.
“This request means Western ideology has become passive, that capitalist thought and the system of domination have failed,” Gholam Hossein Elham was quoted as saying by the Mehr news agency.

“Negotiation is secondary, the main issue is that there is no way but for (the United States) to change,” he added.

After nearly three decades of severed ties, Obama said shortly after taking office this month that he is willing to extend a diplomatic hand to Tehran if the Islamic republic is ready to “unclench its fist”.

In response, Iranian President Mahmoud Ahmadinejad launched a fresh tirade against the United States, demanding an apology for its “crimes” against Iran and saying he expected “deep and fundamental” change from Obama.