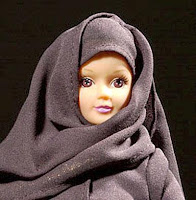 Tunisian Barbie in a hijab.

The religious leader of Qom banned Barbie dolls this week due to her Zionist roots.
IRNA reported:

Religious leader in holy Qom Ayatollah Naser Makarem Shirazi said on Sunday that trading and keeping of Israeli-made goods including the Barbie dolls, are forbidden.

He said in a statement that purchasing and keeping of products which are made in factories belonged to the Zionist regime were religiously forbidden (Haram).

He was responding to a letter which requested his religious view on trading, keeping and gifting the Israeli-made Barbie dolls or any other items bearing its picture.

The verdict was a reaction to the ongoing Israeli onslaught on the Gaza Strip which has so far left more than 800 killed and nearly 4,000 injured after three weeks of savage attacks.

This is not the first time Barbie has been banned.
In April of last year Barbie was banned by the mullahs after she was declared a threat to Iranian culture.