Hurray! The Iranian Foreign Minister Manouchechr Mottaki announced today that the regime is ready to cooperate with Barack Obama.
This follows the announcement yesterday by the regime that it would not halt its nuclear program. 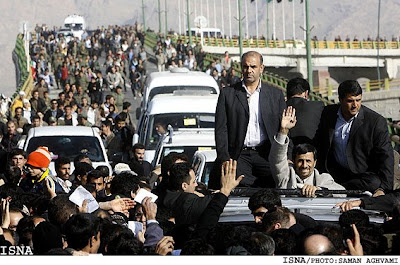 Iran is ready to cooperate with President Barack Obama if the United States changes its policies and practices in the region, Iran’s Foreign Minister Manouchechr Mottaki said on Thursday.

“We do believe that if the new administration of the United States, as Mr. Obama said, is going to change its policies, not in saying but in practice, definitely they will find the region in a cooperative approach and reaction.

“And Iran is not excluded from this general understanding in our region,” Mottaki said at a panel before the World Economic Forum.

US-Iranian relations under the Bush administration were frozen. But a British newspaper reported on Thursday that the US is drafting a letter to Iran to pave the way for face-to-face talks, and a State Department official said that US policy toward Iran was under review.

Asked about US relations on a panel here at Davos, Mottaki welcomed the new US president’s theme of change, upon which he ran his election campaign.

Maybe Obama will begin the dialogue by telling the regime to quit killing our soldiers.
That would be a good start.

UPDATE: Here is a look at the work of the Iranian regime.
22 prisoners were hanged last week by the regime.
This video was taken at one of the mass public hangings: