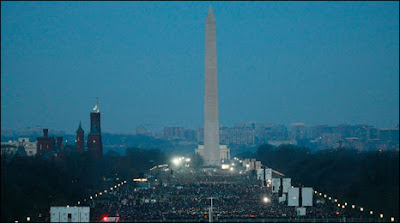 Millions gather in the US capital to see Barack Obama sworn in as America’s 44th president – and its first African-American leader. (BBC)

The Inauguration was live on U-Stream. I later took the link down.
Here’s a view of the oath of office:

Denzel Washington was one of the early arrivals for the swearing in ceremony this morning. 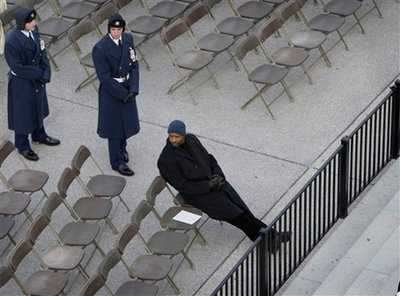 Actor Denzel Washington is among the early arrivals for the inauguration of Barack Obama and Joe Biden at the U.S. Capitol in Washington, Tuesday, Jan. 20, 2009. (AP/Elise Amendola) 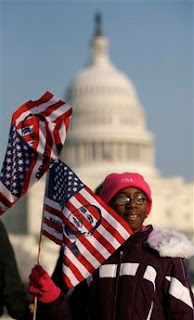 Michelle Malkin notes the flag desecration.
Next Round has the inaugural drinking game… Get ready to get plastered.

The Obamas went to church this morning. There was no swearing.

The US markets celebrated by sliding 155 points at opening.
Gold prices spiked.
But, not everyone is suffering…
At least the DC hookers have seen a spike in business.

Melanie Phillips is not feeling it.

UPDATE 2: Here’s the Obama speech.
CNN is already chipping it in marble.

UPDATE 3: It was an awful speech.