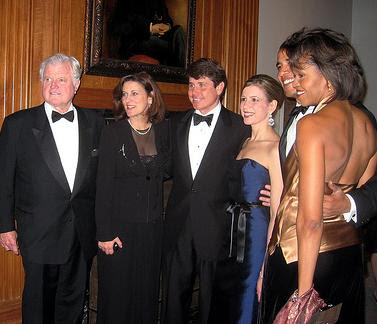 Federal officials already announced in September that they had enough evidence to indict long-time Obama friend and close associate Illinois Governor Blagojevich on different charges. The friends are seen here with their wives at a Chicago function with Ted Kennedy. (Flickr)

“The citizens of this state must have confidence that their governor will faithfully serve the people and put their interests before his own. It is with profound regret that the committee finds that our current governor has not done so,” says the 69-page document posted by Democratic and Republican members on the House Web site.

“For all the reasons stated in this report and the evidence contained in the record before the committee, the special investigative committee for the Illinois House of Representatives, 95th General Assembly, finds that the totality of the evidence warrants the impeachment of the governor for cause,” the draft report concludes.

The language in the 69-page draft report reflects the sentiments of the 21 members on the House panel, who began looking into impeachment proceedings against the governor on Dec. 16–a week after Blagojevich was arrested at his North Side home on federal criminal charges of allegedly using the governor’s office for personal and political gain.

He’s not alone…
New Mexico’s Gov. Bill Richardson, who was the newly named Secretary of Commerce in Obama’s about-to-be Cabinet, is also being investigated by a federal grand jury.