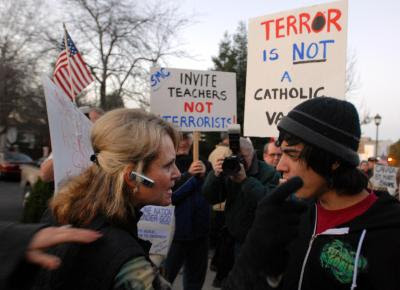 Sherry Perussina of Danville has a word with Saint Mary’s College student Moises Gonzalez, 21, about Bill Ayers as she and a group protested Ayers’ speech on campus in Moraga, Calif., on Wednesday, January 28, 2009. Ayers is a founder of the radical Weather Underground of the Vietnam War era and now a professor at the Univeristy of Illinois at Chicago. Move America Forward and other groups called on the college to cancel Ayers’ speaking engagement. (Susan Tripp Pollard/Staff)

Shame on St. Mary’s for having this warped terrorist speak on campus.
ABC 7 reported:

A controversial man, who became a political liability for Barack Obama during the campaign, was in the Bay Area on Wednesday night. The 1960’s and 1970’s radical and current college professor Bill Ayers spoke at St. Mary’s College in Moraga. However, he was met with a large group of conservative protestors.

Bill Ayers, the former leader of the radical group The Weather Underground was interrupted several times. He quoted Dr. Martin Luther King and lectured on ethics and democracy, while a crowd outside called him a terrorist for his anti war activities.
“We will hound Bill Ayers to the gates of hell,” said Melanie Morgan, from Move America Forward.