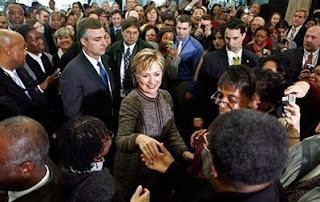 US Secretary of State Hillary Clinton greets employees at the State Department’s headquarters in Washington. Clinton took charge Thursday of US foreign policy proclaiming a “new era for America” based on robust diplomacy and a fresh unity of purpose. (AFP/Chip Somodevilla)

Hillary Clinton arrived at the State Department yesterday and promised to boost morale as the new Secretary of State. Hillary will bring her extensive people skills with her into this “new era” of foreign policy.
Here are a few examples of where Hillary used her diplomatic skills to promote change:

She ought to do just swell.