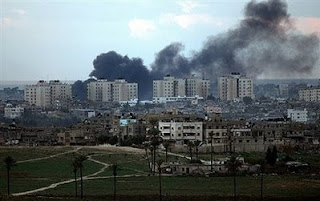 Smoke billows after an Israeli air strike in the Jabalia refugee camp in Gaza City as seen from the Israeli-Gaza border. Hamas supremo Khaled Meshaal on Friday warned Israel that a “black destiny” awaits the Jewish state if it launches a ground offensive into the Gaza Strip. (AFP/Patrick Baz)

A Hamas spokesman said tonight that the terror group had repelled an Israeli advance into Gaza.
The Khaleej Times reported:

The armed wing of Hamas said on Saturday its fighters had repelled a patrol of Israeli special forces troops trying to cross the border into the Gaza Strip.

A spokesman for the Ezzedine al-Qassam Brigades told AFP that fighters spotted an unspecified number of special forces trying to enter the Shijaiyah border neighbourhood of eastern Gaza City at around 1 am (2300 GMT Friday).

He said the fighters fired six mortar rounds at the Israelis, who returned fire with small arms and retreated. He said there were no casualties.

A spokesman told AFP the Israeli army was “not familiar with the incident,” adding that no soldiers had crossed into Gaza since the beginning of Israel’s air campaign against Hamas on December 27.

The Jerusalem Post has more on this reported incident.