Guilty!… Coulter gets a life sentence– 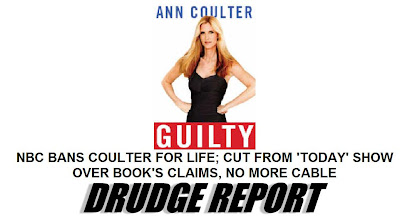 The Politico reported that Ann Coulter was scheduled to appear on the “Today” show Tuesday morning to promote her new book, “Guilty.” But it’s now been canceled, according to her website.

Coulter wrote: “TODAY SHOW AND TODAY SHOW FOURTH HOUR: CANCELLED!”
“I guess this ends the ‘they just want to get ratings’ argument about liberal media bias,” Coulter wrote underneath.

Ann Coulter will be on Hannity and Colmes tonight.