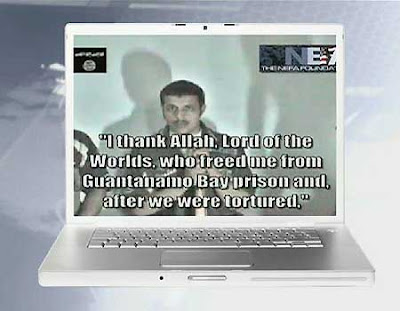 FOX News obtained martyrdom video of former Gitmo detainee Abdallah Ali al-Ajmi before he blew himself up in Mosul, Iraq:

As President Obama pushes for the closure of Guantanamo Bay prison, the debate over where to house the terror detainees being held there is heating up.

An exclusive video of a former Gitmo detainee’s martyrdom tape, obtained by FOX News, is a reminder of the concerns that terror suspects — who have been held but released from Guantanamo Bay — are increasingly returning to the fight against the United States and its allies.

Abdallah Ali al-Ajmi was transferred back to his home country of Kuwait after his release from Guantanamo in 2005. Last April he blew himself up in a homicide attack that killed 12 people in Mosul, Iraq.

Al-Ajmi, known in Guantanamo as Detainee 220, made his martyrdom tape before the attack.

“In the name of Allah, most compassionate, most merciful and prayers and peace be upon our Prophet,” al-Ajmi says in the video. “I thank Allah, Lord of the Worlds, who freed me from Guantanamo prison and, after we were tortured, connected me with the Islamic State of Iraq [ISI]. And it is the gift of Allah to follow the path of this nation, the ISI.”

In the video, translated by the NEFA Foundation, a non-profit that tracks terror groups, al-Ajmi mentions Guantanamo Bay right away. For many jihadists, having served time at Guantanamo is seen as a badge of honor.

Meanwhile… CNN is pushing some sort of jihadi rehab for the Gitmo detainees.
…Since it worked so well in the past.