A court in the German capital struck down an administrative ban on Hamas flags, clothing and banners on Friday, but left in place the ban on invoking Hamas Foreign Minister Mahmoud Zahar’s call to murder Israeli children worldwide.

The decision paved the way for supporters of the Islamist movement to march in anti-Israeli rallies on Saturday with pro-Hamas paraphernalia.

The Hamas Charter calls for the “obliteration of Israel.”

During an anti-Israeli demonstration organized by the radical Islamic group, Milli Görüs, which attracted 10,000 protesters last Saturday in Duisburg, two police officers stormed the apartment of a 25-year-old student and his 26-year-old girlfriend and seized Israeli flags hanging on the balcony and inside a window. 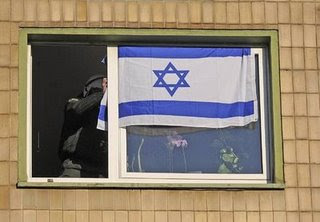 The pro-Hamas protesters cheered “Alluha Akbar” as the German police ripped the Israeli flag out of the window.

…When asked if the Duisburg police plan to confiscate Israeli flags from supporters who demonstrate against an anti-Israeli protest slated for this coming Saturday, Ramon van der Maat, a Duisburg police spokesman, told The Jerusalem Post that, “we have to see what is expected” at the protest, adding, “It depends on the situation and one cannot, across the board” say that Israeli flags will be permitted.

Ed Driscoll said that things are starting to look a lot like 1942 lately.
He might be on to something.