The Hill reported, via Drudge:

The crowd packed on the west side of the Capitol grounds serenaded President Bush in mocking fashion when he took to the inaugural stage alongside Vice President Dick Cheney.

The crowd packed immediately below the podium received Bush in stony silence when he took his seat on the stage surrounding the podium where Barack Obama was scheduled to take the oath office to become the 44th president of the United States.

The jeers are among the final public feedback Bush will receive as president.

First Lady Laura Bush and Lynne Cheney received light applause when they were announced to the crowd.

Bush is scheduled to depart from the East Front of the Capitol by helicopter after the swearing-in ceremony.

Obama received the loudest sustained cheers from thousands who chanted his name.

And, once again it didn’t matter that his daughters were there to witness the abuse… 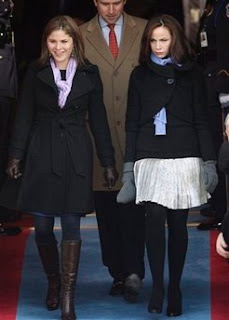