The women held a peaceful protest until the hoodlums came and broke it up. 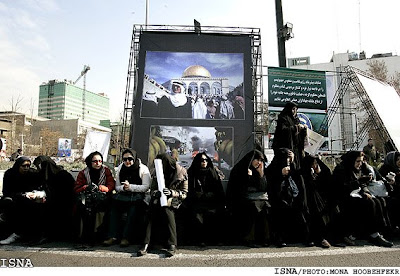 A peaceful and quiet gathering that was hosted by the Mothers for Peace group in Iran ‎and attended by several civil society activists condemning violence and the deadly war in ‎the Gaza Strip, held in front of the Palestinian embassy in Tehran, was marred in violence ‎within hours after vigilante militia attacked the demonstrators. Last week, a group of ‎vigilante militia attacked Nobel laurette Shirin Ebadi’s house on the excuse that she did ‎not condemn the deadly attacks in Gaza. ‎

Yesterday’s gathering, which was hosted by the Mothers for Peace group and attended by ‎various groups and civil society activists, was held at 11 o’clock in front of the ‎Palestinian embassy. After an hour, however, the gathering turned violent when a group ‎of vigilante militia attacked the demonstrators while shouting slogans such as “Death to ‎Peace Activist” and “Death to Collaborator.” ‎

Noting her disbelief of yesterday’s attack and that the Mothers for Peace had staged the ‎gathering to support children and mothers and the defenseless people of Gaza, Nobel ‎Peace Laureate Shirin Ebadi told Rooz, “Last week my house and office were attacked. ‎The attackers accused us of being silent in face of Israel’s aggression, even though the ‎Center for the Defenders of Human Rights had in fact issued a statement supporting the ‎defenseless people of Gaza. How is it that when we remain silent, they attack us, and ‎when we protest the aggression on Gaza, they still attack us? And all the attacks take ‎place in the presence of the police?”

…Suddenly an ‎aggressive group approached the gathering and began shouting slogans such as ‘Death to ‎America,’ ‘Death to Israel,’ ‘Death to Anti-Supreme Leader,’ etc. Gradually the tone of ‎slogans changes and in response to our slogan, ‘Peace, Peace, Ceasefire,’ they began ‎shouting, ‘War, War, Until Victory.’ They were shouting so loud that the voice of six or ‎seven of them was louder than our loudspeakers.” ‎
‎