Unbelievable.
This was a disgusting new low even for Harry Reid.

Reid says he says he was “keeping with what David Petraeus was saying.”
Liar.

Besides bashing President Bush, Harry Reid said today on Meet the Press that the war is still lost and that there is a civil war in Iraq and Israel?
You need a shovel to work your way through this interview:

MR. GREGORY: Let me ask you about the war in Iraq. In April of 2007, this is what you said: “I believe myself that … this war is lost and the surge is not accomplishing anything.” Were you wrong?

SEN. REID: David, I first met General David Petraeus in Iraq. He was training the Iraqi forces at that time. At that time, he knew it wasn’t working. After he became the commander in Iraq, he and I sat down and talked. He said to me, and he said within the sound of everyone’s voice, “The war cannot be won militarily.” I said it differently than he did. But it needed a change in direction. Petraeus brought that about. He brought it about–the surge helped, of course it helped. But in addition to that, the urging of me and other people in Congress and the country dictated a change, and that took place. So…

MR. GREGORY: But you said the surge was not accomplishing anything. Even Barack Obama said last fall that it exceeded everyone’s expectations and succeeded beyond our wildest dreams.

SEN. REID: Listen, at that–the time that statement was made, the surge–they weren’t talking about the surge. Petraeus added to the surge some very, very interesting things that changed things. He said a lot–just simply numbers of troops is not going to do the deal. What we need to do is work with the Iraqi people, which we haven’t done before. That’s where the Awakening Councils came about, as a result of David Petraeus’ genius. He’s done–he will be written about in the history books for years to come. My original statement was in keeping what David Petraeus said; that is, the war cannot be won militarily.

MR. GREGORY: Do you believe that the war in Iraq has been lost?

SEN. REID: I don’t think at this stage we can talk about that with any degree of sensibility. That has to be something that will talked about in the history books to come. We…

SEN. REID: David Petraeus and Harry Reid spoke at the same time. David Petraeus said that the war cannot be won militarily, I said what I said. Who, who phrased it the best is…

SEN. REID: David, listen, someone else will have to determine that as the years go on. What has the war done? It’s brought about–it’s destabilized the Middle East. We have a civil war going on in Israel. We have a civil war in Iraq, as indicated today, more than 50 people killed with a bomb in Iraq today. We have Lebanon, a civil war there. We have Iran thumbing their nose with every, everyone. And if that weren’t bad enough, our standing in the world community is so far down as a result of this war, so–and that doesn’t take into consideration the tens of thousands who have been injured…

Harry Reid is either ignorant and uninformed or completely dishonest: 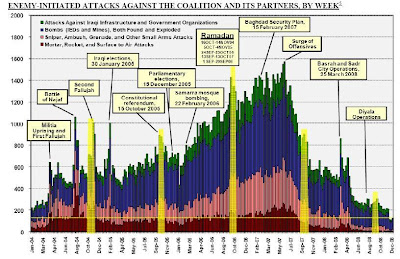 Enemy attacks today are at an all-time low.
US fatalities and injuries are also at all-time lows.
Leave it to the top democrat in the US Senate to completely discredit our military.
What a disgrace.

Macsmind has more on Reid.

Ace finds this trick by Harry “This war is lost” Reid to be particularly galling.
Agreed.