Could our Pravda Media be any more transparent in their devotion to Obama? 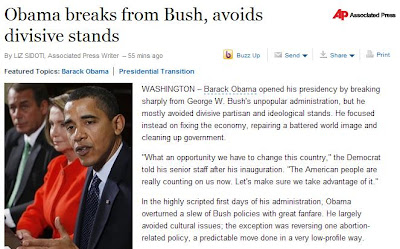 Only a Far Left lib could believe this.

WASHINGTON – Barack Obama opened his presidency by breaking sharply from George W. Bush’s unpopular administration, but he mostly avoided divisive partisan and ideological stands. He focused instead on fixing the economy, repairing a battered world image and cleaning up government.

“What an opportunity we have to change this country,” the Democrat told his senior staff after his inauguration. “The American people are really counting on us now. Let’s make sure we take advantage of it.”

It must be nice being the teflon media messiah.