When democrats said they were going to spend their way out of this economic crisis they were serious.
Here are a couple of charts that show the historic amount of cash spent by democrats since they took control of Congress in 2006.
This is what democrats call “jump-starting” an economy.

East Coast Economics is “currently doing some research on the (likely) Treasury bubble, and the charts I’m coming across are nothing but scary – one more so than the other. Check out the following which shows the [dollar] amount borrowed by US banks from the Fed through Dec 2007; the spike marks the Savings & Loan Crisis at the end of the 1980s with borrowing maxing out at $8b…” 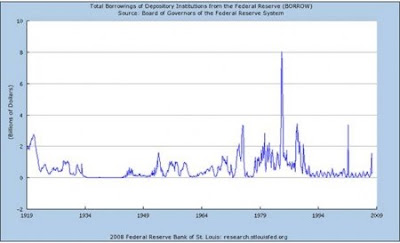 “Now take a look at the following chart. It is the same graph as above, but updated through the beginning of November ‘08.” 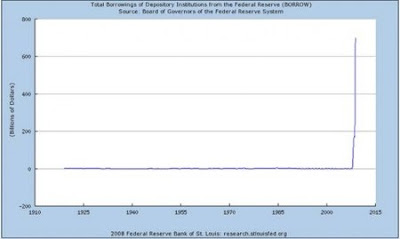 “This might be less scary if the Fed wasn’t creating money out of thin air and at the same time accepting assets of questionable – and deliberately undisclosed – quality as collateral from banks. As it stands, I am not surprised that 10 year CDS on US Treasuries are above 60bps (high of 72bps at the beginning of December vs. a pre-08 historical average of 2bps).”

Now, look at this chart posted at Power Line from the Federal Reserve Bank:

As we noted here, the Democratic Congress has embarked on a program of deficit spending that dwarfs anything we have seen since World War II. Monetary policy, too, has gone off the charts. This graph, from the Federal Reserve Bank of St. Louis, is stunning. It shows the nation’s “adjusted monetary base,” a measure of the money supply, from the end of the First World War to the present. Click to enlarge: 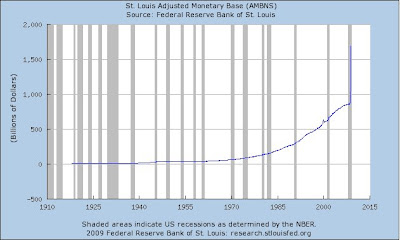 Could this thriller possibly have a happy ending?