After his arrest the media said that shoe-chucker al-Zeidi suffered broken ribs, a broken arm and internal bleeding…
Nope.

Shoe-chucker Muntadar al-Zeidi loves Che, loves US enemy Al-Sadr, and assaulted Bush.
No wonder he is so respected by the American Left. 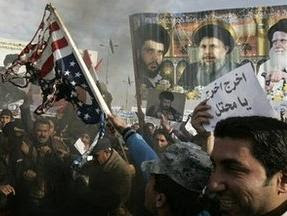 An American flag is burned during a protest for the release of Iraqi journalist Muntadar al-Zeidi who threw his shoes at President George W. Bush during a press conference in Baghdad on Sunday. (AP/Karim Kadim)

Now we know the truth about shoe-chucker and Leftist hero Muntadhar al-Zeidi.
After his arrest for assaulting President Bush, the media reported that al-Zeidi, suffered severe injuries and broken bones.
The BBC reported:

The brother of the Iraqi journalist who threw his shoes at US President George W Bush has said that the reporter has been beaten in custody.

Today we learn that those injury reports on the Sadr-loving reporter were bogus.
The AP reported today:

The case’s investigating judge has said the journalist was struck about the face and eyes, apparently by security agents who wrestled him to the floor after he hurled his shoes, forcing Bush to duck for cover.

Maitham al-Zeidi was not available to comment on the visit, but another brother, Dhargham, told The Associated Press that he was told the wounds had healed.

So much for those broken ribs and that broken arm.
It looks like it was just another one of those media reports to bash the Iraqi government and condemn the Bush Administration.
And once again, it was not true.

More… Tom W. in the comments has a different take on the shoe-chucking episode:

The shoe-chucking incident is a watershed in the middle east, signaling a massive change for the better.

An Arab man tossed his shoes at a head of state, and he was not killed; his family was not arrested; the press reported on both sides of the issue; people were allowed to protest in support of the shoe chucker, as is their right; and the Iraqi prime minister did not interfere in the prosecution of the man.

Arabs all over the region have seen that Iraq is now a free country, due to the man who was the target of the shoe throwing.

The shoe chucker did a huge service to President Bush and our troops. He proved definitively that Operation Iraqi Freedom is a success, and the war is won.