Evidently, they didn’t steal their tickets this time.
Their liberal friends in Congress scored them tickets. 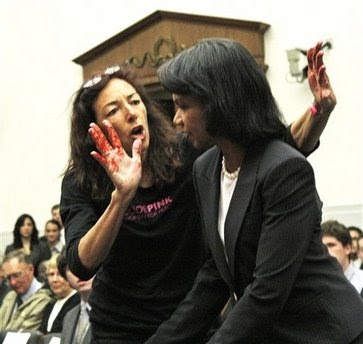 The Code Pink members were sitting within 100 feet from the stage but didn’t feel the sudden impulse to rush the podium like they do when a Republican is speaking.
The Washington Times reported, via Free Republic:

You know things have changed in Washington when Code Pink gets seats up front at the inauguration.

Medea Benjamin, the group’s founder, and Desiree Fairooz, one of the group’s most visible members, are in Section 10, about 100 feet from the stage.

I asked if someone in Congress had given Medea her tickets. She just smiled and said, “We do have friends.”

Both women are wearing — what else? — all pink and carrying homemade signs made out of pink sheets.