Unfortunately, the Houston vandals were not up on their history.
George Bush “41” had been out of office for 16 years. 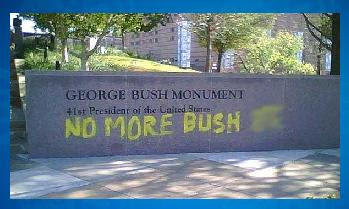 Police released a description of the loon:

The man was described as having long blond hair, possibly in a ponytail, and wearing a plaid shirt. He may still have some yellow paint on him.