London, Jan 8, IRNA — Photographic evidence has emerged that proves that Israel has been using banned white phosphorus (WP) shells during its attacks on Gaza, despite official denials and a blanket ban on foreign journalists.

According to the Times newspaper, there is also evidence that the firing of rounds of WP, which is prohibited under international law, has injured Palestinian civilians, causing severe burns.

The daily said Thursday it had identified stockpiles of WP shells from high-resolution images taken of Israel Defence Forces (IDF) artillery units on the Gaza border this week.

The pale blue 155mm rounds are clearly marked with the designation M825A1, an American-made WP munitions. The shells were said to be an improved version with a more limited dispersion of the phosphorus, which ignites on contact with oxygen.
The rounds, which are being used to create a smokescreen on the ground, explode into a shower of burning white streaks and, were first identified by The Times at the weekend when they were fired over Gaza at the start of Israel’s ground offensive.
“Artillery experts said that the Israeli troops would be in trouble if they were banned from using WP because it is the simplest way of creating smoke to protect them from enemy fire,” the newspaper said.

Mads Gilbert, a Norwegian war surgery specialist working in Gaza, said that he had seen injuries believed to have resulted from Israel’s use of a new “dense inert metal explosive” that caused “extreme explosions”.

The Israelis are not firing White Phosphorus incendiary weapons into Gaza.

This photo from Gil Cohen Magen two days ago shows Israeli 155mm M825A1 white phosphorus shells, with “M825A1” written clearly on the sides. I’ve cropping the image to focus on the M825A1 shells. 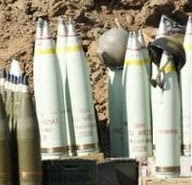 …These are artillery shells and they contain white phosphorus, but they are not incendiary weapons, and they are not, by any remote measure, illegal to use in Gaza or anywhere else. They are smoke shells, used to create smoke screens.

Once again… Are you really surprised by this?
This is just the latest example of how the Far Left continues to assist the radical Islamists.
No wonder all of the Islamists were backing Obama and the liberals again this year.