President Bush commutes the sentences of Ignacio Ramos and Jose Alonso Compean, convicted of shooting a Mexican drug runner in 2005.
Their prison sentences will now expire on March 20, 2009. 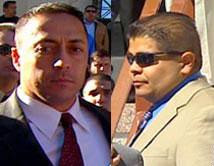 Two former Border Patrol agents, Ignacio Ramos and Jose Compean, were sentenced in 2006 to an extra decade in prison for firing their guns at a Mexican drug smuggler.

Bush’s decision to commute the sentences of Ignacio Ramos and Jose Compean, who tried to cover up the shooting, was welcomed by both Republican and Democratic members of Congress. They had long argued that the agents were merely doing their jobs, defending the American border against criminals. They also maintained that the more than 10-year prison sentences the pair was given were too harsh.

Rancor over their convictions, sentencing and firings has simmered ever since the shooting occurred in 2005.

Bob McCarty has more on this good news.