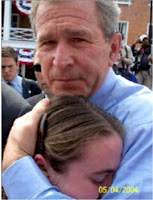 He said he followed his conscience and always acted in the best interests of the nation. 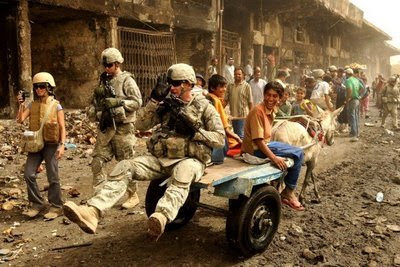 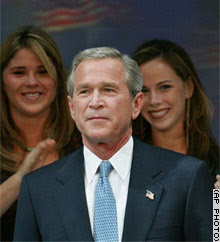 President Bush Expresses His Gratitude To The Nation, Recaps The Events And Accomplishments Of His Presidency, And Describes The Challenges That Lie Ahead

Tonight, President Bush will deliver his farewell address to the Nation from the East Room of the White House, and discuss the journey traveled over the past eight years and the course ahead. The President will thank the American people for allowing him to serve and thank the military for serving our Nation and keeping us safe. The following are excerpts from the President’s address as prepared for delivery, followed by supporting facts and data. 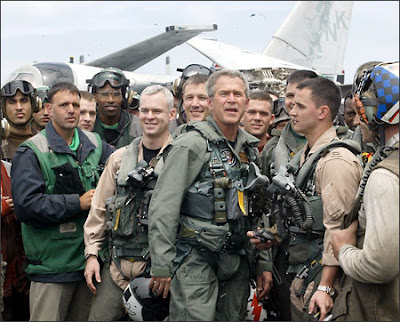 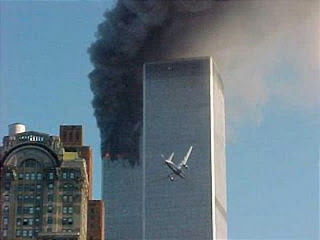 “As the years passed, most Americans were able to return to life much as it had been before 9/11. But I never did. Every morning, I received a briefing on the threats to our Nation. And I vowed to do everything in my power to keep us safe.”

** Consolidated 22 agencies and 180,000 employees under one agency, the Department of Homeland Security, to foster a comprehensive, coordinated approach to protecting our country.

** Provided our military with the tools, equipment, and resources to combat terrorism and other emerging threats and started moving American forces from Cold War garrisons in Europe and Asia so they can deploy more quickly to any region of the world.

** Established a unified, collaborative intelligence community, led by the DNI, to ensure information is shared among all intelligence and law enforcement professionals so they have the information they need to protect the American people.

** Combined the counterterrorism, counterintelligence, and intelligence elements of the FBI under the leadership of a senior FBI official.

** Advocated for and signed the Patriot Act, the Intelligence Reform and Terrorism Prevention Act, and a modernization of the Foreign Intelligence Surveillance Act.

** Arrested and convicted more than two dozen terrorists and their supporters in America since 9/11. Froze the financial assets in the United States of hundreds of individuals and entities linked to terrorism.

** Disrupted terrorist plots and built a coalition of more than 90 nations to fight terrorism. Partnered with nations in Europe, the Middle East, Asia, Africa, and Latin America on intelligence sharing and law enforcement coordination to break up terrorist networks and bring terrorists to justice.

** Removed the Taliban from power and brought freedom to the people of Afghanistan. Supported the creation of an Afghan government that is elected by its people, respects the rule of law, and guarantees women the right to vote. More than six million children, approximately two million of whom are girls, are now in Afghan schools, compared to fewer than one million in 2001.

** Freed Iraqis from the rule of Saddam Hussein, a dictator who murdered his own people, invaded his neighbors, and repeatedly defied United Nations resolutions. Supported the creation of a democratic Iraqi government that is operating under one of the most progressive constitutions in the Arab world, and helped train and equip more than half a million Iraqi Army and police forces.

** Successfully negotiated a Strategic Framework Agreement and a Security Agreement with Iraq, which will further strengthen the relationship between our nations, provide the United States with vital protections and authorities to continue our mission to help stabilize Iraq, and establish a path for U.S. forces to reduce their presence in Iraq and return home on success. 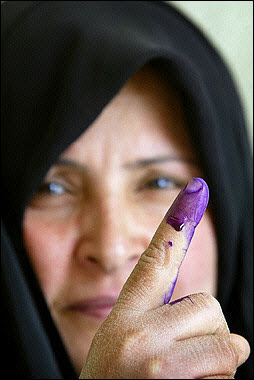 ** President Bush: “When people live in freedom, they do not willingly choose leaders who pursue campaigns of terror. When people have hope in the future, they will not cede their lives to violence and extremism. So around the world, America is promoting human liberty, human rights, and human dignity.”

** Committed $1.2 billion in funding through the President’s Malaria Initiative over a five-year period, which is on track to help reduce malaria deaths by 50 percent in 15 targeted countries in Sub-Saharan Africa. 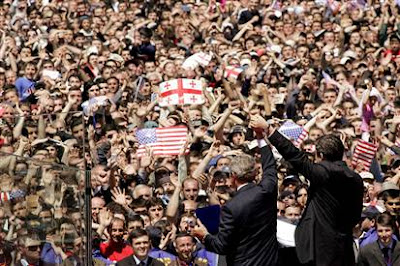 ** President Bush: “For eight years, we have also strived to expand opportunity and hope here at home.”

** Held public schools accountable, through the No Child Left Behind Act, for producing results for all students and required highly-qualified teachers in every classroom. Since No Child Left Behind took effect, test scores have risen, accountability has increased, and we have begun to close the achievement gap between white and minority students. Helped African-American and Hispanic students post all-time highs in several categories on national assessments. 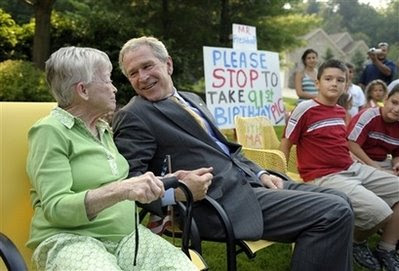 ** Through the Faith-Based and Community Initiative, helped millions in need by expanding partnerships with nonprofits and leveling the playing field for faith-based and community organizations. These partnerships helped provide care for more than ten million people affected by HIV/AIDS, supported the recovery of more than 260,000 addicts, and matched mentors with more than 100,000 children of prisoners.

** Outlawed partial birth abortion, ensured that every infant born alive is protected, established consequences for violence toward unborn children, and took steps to protect the rights of health care providers to act according to their conscience. Provided government funding for stem cell research while refusing to sanction the destruction of human life.

** Increased total funding for the Department of Veterans Affairs more than 98 percent since 2001 and helped millions of veterans receive expedited and improved care.

** Instituted policies that helped reduce air pollution by 12 percent from 2001 to 2007 and adopted new policies that will produce even deeper reductions. Improved and protected the health of more than 27 million acres of Federal forest and grasslands and protected, restored, and improved more than three million acres of wetlands. Provided the highest recognition and protection to nearly 335,000 square miles as marine national monuments, the largest marine area in history.

** Appointed Supreme Court Chief Justice John Roberts, Associate Justice Samuel Alito, and more than one-third of all active Federal judges, who will not legislate from the bench.

** Addressed the weakness in the economy early in 2008 by leading the bipartisan passage of an economic growth package that boosted consumer spending and encouraged businesses to expand. Responded with bold action when the financial crisis intensified by leading the passage and implementation of a rescue plan that helped address the root of the financial crisis, protected the deposits of individuals and small businesses, and helped ensure credit would remain available to individuals and families. Had the President not acted, the toll would be far worse on hardworking American families. 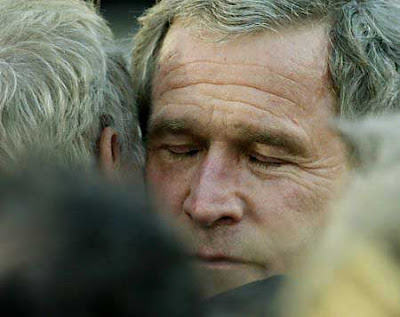 …Thank you.
You will be missed.

Thanks to The Anchoress for the pics.

UPDATE 2: Obama skipped the Bush speech. He went out to eat with Michelle instead.