Former Bolivian Congressman, political dissident and friend, Jose Brechner, sent this analysis on the latest radical developments in Bolivia. This past weekend the people of Bolivia approved a new constitution that gives more power to Marxist President Evo Morales, takes the power away from the individual and for the first time in history refused to recognize the Catholic religion as part of the state. 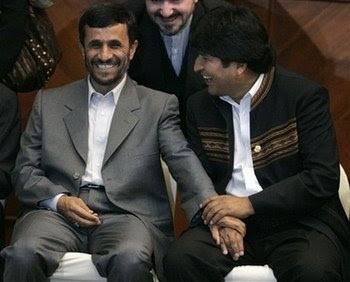 The Marxist Morales has been cozying up with the Iranians for years. Here he gets touchy-feely with Iranian President Mahmoud Ahmadinejad. (Flickr)
Jose Brechner sent this translated report on the situation in Bolivia earlier today:

After four years of Evo Morales swearing in, Bolivians live anguished, while what was predicted is complied with – opposition persecution, state terrorism, vandalism, despotism, nepotism, racism, corruption, plunder to the country, lack of basic products, poverty on the rise, unlimited drug-trafficking, murder, lynching, torture, overbearing threats from members of the government, law violation in a bulk.

Everything and more that happened with the worst de facto regimes that usurped power in the past is happening in Bolivia. Morales is the classic barbarian leader similar to those of other times, but with foreign support.

November last, his closest and most loyal followers, the bloodthirsty indians from Achacachi—a town close to La Paz–, after brutally beating up a group of 11 men and women between the ages of 40 and 60 that were visiting the place, were burnt alive until nine of them died. They accused them of theft, but they did not prove their crime.

They call it Community Justice, and the indigenous government authorizes it as right to the ethnic groups that originated in the new political constitution, which also talks about perpetuating Morales into power.

There is fear in Bolivia, and a lot of it, because those who do not know the frantic indians do not know terror. The closest to the Bolivian altiplano indigenous are the hordes of Muslim fans.

It is not by chance that the Arabs are strengthening bonds with Morales, they have through the indians the human material propitious to expand the Jihad. The Muslim savagery fits perfectly with that of the Bolvian altiplano.

Morales initiated his friendship with the Arabs before coming into power, when he received the Gadaffi Award and the “Green Book” written by the Libyan dictator became the new bible of the Bolivian president.

Once in power, accompanied by Hugo Chávez, he married Mahmud Ahmadinejad and the ayatollahs from Iran. Coinciding with his commitment to Islam, and his rejection to Christianity, the government recently “denied competencies” to the Bolivian Cardinal Julio Terrazas to “meddle in businesses that concern the population in general.”

The Deputy Minister of Coordination with Social Movements, Sacha Llorenti, who, before filling this position was President of The Human Rights Organization in Bolivia, stated that “the government has certain discrepancies with some catholic leaders.” And how is it not going to have them if they want to put an end to faith and Judeo-Christian tradition!

The Catholic Church has traditionally been the only institution that has served as effective mediator and peace maker in internal conflicts, and now it is being forced to remain silent and disappear.

In his last international rudeness, the president broke diplomatic relationships with Israel, bastion of Judaism and Christianity, obeying Hugo Chávez who previously did the same thing. (They both broke with United States in 2008).

The split does not make an impression on Israel, given the fact that Israel does not get any benefit from that friendship, to the point that after half a century of diplomatic presence in Bolivia, Israel decided to take out its embassy in La Paz a lot earlier than Morales was reelected.

In 1948 Bolivia voted at the UN in favor of the right of Jews to their own state. That was the one-off time. Since then their votes on Israel have been negative. Perhaps because the “life” ambassador that represented it in the forum was of Arab origin.

The diplomat was ratified in the position by all governments, given the fact that most Bolivian presidents had no clue as to what was going on internationally. His mentality has always been town-like, ethnocentric and local.

Evo Morales is not different, he is the least trained of all, but he is guided by well versed Venezuelans and Cubans who indicate when to open his mouth to break the news. Morales obtains notoriety given the support he receives from the leftist media machinery, that exposes him as a specimen worthy of observation.

His vernacular look turns him into a point of interest for the worldwide progress that pays attention to superficial aspects of people more than their intellectual content, and considers that any indigenous in power is a symbol of socio-political advancement.

The split with Israel is important to him in order to strengthen his alliance with the Islamic world, mainly with Teheran. It is not by chance that the announcement was made when Muhammad Abbasi, Minister of Cooperation with Iran, was in La Paz, who has been promising the millionaire investment in Bolivia for quite some time, and of which not one cent has been seen out there.

What is indeed very likely is that instead of the split up, the indigenous start to receive modern weapons, same as those Iran hands to Hamas and Hezbollah.

Muslims want to settle in South America, and there is no better place than Bolivia to start the colonization and Islamic doctrine, where they enjoy a numerous and naïve indigenous population, with no religious conviction.

The new political constitution that will hold a referendum 25 January next, excludes catholic religion as part of the state for the first time in the history of the country. In some not far out time, Muslim clergymen with copies of the Koran under their arms will begin to circulate along the altiplano and the minarets of the mosques will be spotted out from a distance.