Lord knows, she had the F****** cash to pay for it.
The embattled Democratic Governor of Illinois today “Good Morning America” that he considered giving Oprah the senate seat. 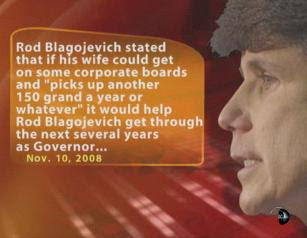 “Good Morning America” has the video.
The AP reported:

The embattled governor told ABC’s “Good Morning America” that the idea of nominating the talk show host came to him as he explored potential candidates for the job that federal prosecutors allege he tried to sell to the highest bidder.

“She seemed to be someone who would help Barack Obama in a significant way become president,” he said. “She was obviously someone with a much broader bully pulpit than other senators.”

The governor worried, though, that the appointment of Winfrey might come across as a gimmick and that the talk show host was unlikely to accept.

The revelation that Winfrey was considered came just hours before his impeachment trial was set to get under way in Springfield. The Democratic governor is refusing to take part, arguing that the rules are so biased that he can’t possibly get a fair hearing.

“There is old gospel song, ‘One Day at a Time Sweet Jesus. With something like this, you take one day at a time. And then you trust in the truth And then you trust in a fair system of justice. And I still believe in America. I still look at the U.S. Attorneys and the federal investigators and all of those who have been pursuing me for four years, I still see them as the good guys. But I see me as one of them. I see us on the same side.”

In related news… For some odd reason the media is ignoring the subpoenas served to Obama senior staff their first week in office.