President Bush and Laura Bush made their first public appearance since leaving Washington at a Baylor women’s basketball game.
The Crowd Roared for the Texas Couple: 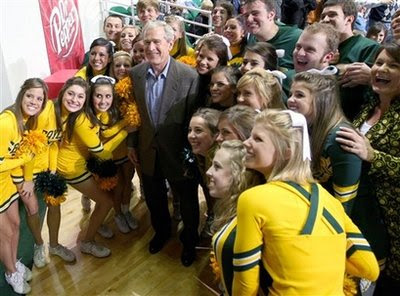 Former President George W. Bush poses with Baylor cheerleaders just before the second half of a NCAA basketball game between Baylor and Oklahoma, Wednesday, Jan. 28, 2009, in Waco, Texas. The former president and his wife Laura attended the game.(AP Photo/Jerry Larson)

XTO Energy Chairman Bob Simpson noticed George W. Bush at a Baylor women’s basketball game in Waco on Wednesday night, he decided to pass the former president a note. “I told him: ‘Thank you for keeping my seven children safe. You did a good job.’ ” Simpson, who said he was raised a Democrat but “can vote both ways,” said he was told Bush would read the note on his way home. School personnel delivered it, negotiating with “about 30 people” guarding Bush and his wife, Laura, Simpson said.