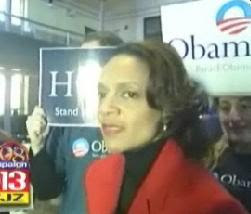 Baltimore Democratic Mayor Sheila A. Dixon was indicted yesterday with only 12 counts of felony, theft, perjury, fraud and misconduct.

Baltimore Mayor Sheila A. Dixon was charged today with 12 counts of felony theft, perjury, fraud and misconduct in office, becoming the city’s first sitting mayor to be criminally indicted.

The case stems in part from at least $15,348 in gifts Dixon allegedly received from her former boyfriend, prominent city developer Ronald H. Lipscomb, while she was City Council president. She also is accused of using as much as $3,400 in gift cards, some donated to her office for distribution to “needy families,” to purchase Best Buy electronics and other items for herself and her staff.

Lipscomb was not indicted in the Dixon case, but he and City Councilwoman Helen L. Holton were charged this week in a separate $12,500 bribery scheme. Both cases grew out of a nearly three-year probe by the state prosecutor into City Hall corruption.

Barack Obama is scheduled to visit Baltimore this week and was planning to meet with his friend and supporter Sheila Dixon.