So much for hopenchange…
Al-Qaeda #3 Abu Yahya al-Libi called for attacks on the United States and Great Britain today. 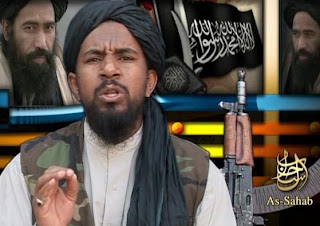 Al-Qaeda leader Al-Libi demanded terror attacks in Britain and the US to avenge Israel invasion of Gaza, “Make them taste the misery of horror.”

Dubai, 22 Jan. (AKI) – Al-Qaeda’s third-in-command Abu Yahya al-Libi has ordered Islamist militants to avenge Israel’s deadly offensive in the Gaza Strip, by launching attacks against western countries including Britain and the United States. “The truth is that the shedding of our blood throughout the world will not end as long as the US and the West are in charge,” al-Libi said in a video posted on Thursday to jihadist websites.

In the 31-minute video, produced by Al-Qaeda’s media arm Al-Sahab, Al-Libi accuses Britain over having sold out the Palestinians to Israel when the Jewish state was created in 1948.

The video also refers to the Mumbai terrorist attacks last November in which suspected Islamists killed 183 people in a three-day rampage. One of the eleven gunmen survived.

“We need to get away from doctrine and do as the lions of Mumbai did by spilling their own pure blood and delivering themselves to Allah, striking a blow to the enemy’s heart,” he stated.

In the video, which has yet to be authenticated, al-Libi called the Mumbai gunmen “heroes” and urged similar acts of retaliation against other Western countries including the United States.

Also today… Barack Obama called for the closure of Gitmo and signed an executive order for the Army Field Manual to be used by all intelligence and law enforcement services… Meaning no harsh interrogations.
…Terrific.
UPDATE: Commenter Darwin says he contacted al-Libi:

I just emailed Al-Libi wondering why he was doing this after Obama just became President. He apologized and said he had gotten side tracked and hadn’t realized that Obama had already been sworn in. He will immediately issue an order for all Al-Qaeda to stand down,

As a side note he wondered why flowers had suddenly bloomed on Jan 20th, rainbows appeared and honey flowed in the rivers.