Joe the Plumber knows how it feels, too.
You’re not supposed to question the wealth redistribution plans by democrats.
Ever. 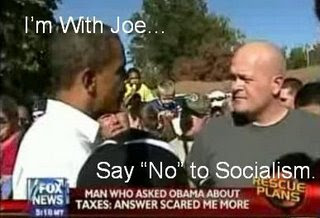 When questioning Barack Obama about his socialist plans to redistribute wealth in America expect a snarky response.
The Politico reported:

President Obama listened to Republican gripes about his stimulus package during a meeting with congressional leaders Friday morning – but he also left no doubt about who’s in charge of these negotiations. “I won,” Obama noted matter-of-factly, according to sources familiar with the conversation.

The exchange arose as top House and Senate Republicans expressed concern to the president about the amount of spending in the package. They also raised red flags about a refundable tax credit that returns money to those who don’t pay income taxes, the sources said.

The Republicans stressed that they want to include more middle class tax cuts in the package, citing their proposal to cut the two lowest tax rates — 15 percent and 10 percent — to ten percent and five percent, rather than issue the refundable credit Obama wants.

While discussing the stimulus package with top lawmakers in the White House’s Roosevelt Room, President Obama shot down a critic with a simple message.

“I won,” he said, according to aides who were briefed on the meeting. “I will trump you on that.”

The response was to the objection by Rep. Eric Cantor (R-Va.) to the president’s proposal to increase benefits for low-income workers who don’t owe federal income taxes.

Jules Crittenden has more on the Obama’s Bushian comments.