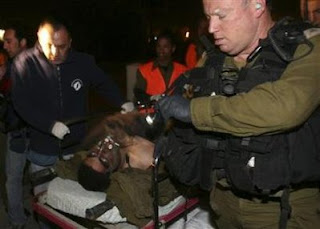 An Israeli soldier, wounded during Israel’s offensive in Gaza, is wheeled into Soroka hospital in the southern city of Beersheba January 5, 2009. (Eliana Aponte/Reuters)

FOX News reporter Mike Tobin sent an ominous email to Greta Van Susteren earlier today.
Greta said they were going to discuss this tonight on her show.
(Later) Mike Tobin just confirmed that 3 Israeli soldiers were killed and 24 wounded in a friendly fire incident in Gaza.
YNET News has more:

Three IDF soldiers were killed and 24 others were injured, one critically and three seriously on Monday evening, in a friendly fire incident in northern Gaza.

Among the fatalities were two officers and a soldier. Colonel Avi Peled, commander of the Golani Brigade sustained minor injuries in the incident.

The injured were triaged and cared for on site before being airlifted to the Chaim Sheba Medical Center at Tel Hashomer, Soroka University Medical Center in Beersheba, Hadassah Ein Kerem Hospital in Jerusalem and the Rabin Medical Center in Petah Tikva. All of the families have been notified.

According to the IDF Spokesman’s Unit, the grave incident occurred when a tank, deployed as part of Operation Cast Lead, accidentally fired a live round at an abandoned building in Jabalya, in which Golani forces, who were operating in the area, took cover.

The Jerusalem Post reported that an earlier suspicion that the home was booby-trapped has been ruled out.

The Muqata and Israellycool are following the developments.

The Berman Post has several photos from another pro-Hamas rally in NYC today.