200 top economic minds signed a national ad published in The New York Times and the Wall Street Journal against the trillion dollar spending binge proposed by democrats. The ad, sponsored by the Cato Institute, blasts the massive boondoggle that funds liberal projects under the guise of “stimulating” the economy.
St. Louis Today and Free Republic reported:

“There is no disagreement that we need action by our government, a recovery plan that will help to jumpstart the economy.”

Here’s a copy of the ad: 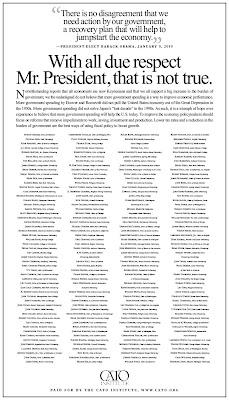 The signers include some prominent names, including those of Nobel prize winners James Buchanan, Edward Prescott and Vernon Smith.

Larry Kudlow added this on the massive spending binge:

Government spending, deficits, and debt creation of this magnitude is simply unheard of. So the added TARP money will surely imperil the entire stimulus package as taxpayers around the country begin to digest the enormity of these proposed government actions. Financing of this type would not only destroy the U.S. fiscal position for years to come, it could destroy the dollar in the process. What’s more, the likelihood of massive tax increases — which at some point will become front and center in this gargantuan funding operation — would doom the economy for decades.

With only a 42% of the public supporting the plan it looks like the tide may be turning on this disastrous piece of legislation.